Greetings for everyone who are still with me and my photoblog. Fellow bloggers and friends/family in Facebook have been really great these past years. Your support all these years have been a huge boost to my growth in photography, and I am forever grateful. I wish you a joyful and prosperous New Year of 2014, which filled with lots of belly laughs that bring tears down your cheeks.

I’d like to extend my congratulations to those who have bravely started their 2014 project on the 1st of January (mere three days ago), be it project 365 (yes, looking at you, and you), or a photo a week project,  or any other creative and stimulating projects.

Some of you might still remember my project 365 in 2012, which I missed doing terribly in 2013. I missed how intense the experience could be, I mean, yeah, the pressure of producing a photo a day came only from myself, but still, I missed the fun! Call me crazy but I loved the discipline, organisation, and creativity demanded from that project. I felt my skills improved tremendously. It is true what they say, you can only get better at something by doing it more, and more practice.

This year I decided to start the 52 Portrait Project. I know that my true passion is in photographing people. Be it a classic portrait style, a profile silhouette against the light, a reflection or just some silly faces looking at you, I love doing them all. I just love capturing everything about people. In this 52 Portrait Project, I will share one or more photo(s) of people a week, for 52 weeks. The style and ways of editing will (hopefully) vary each week; but you will see a person or two or more in my photographs.

I am away from home as I was writing this post to start the project. You see, I am ‘officially’ still on my holiday with my family until the end of (Australia’s) summer holiday, but that’s okay. There’s an easiness in starting the project at the beginning of the year, despite the challenge of getting organised on the holiday, because the start and end dates are just right there! 1st January and 31st of December. Bang!

Anyway, let’s get this party started, shall we…

This week’s portraits were of my daughter. Our family was lucky enough to travel to Jordan   and stayed in the Dead Sea area at the end of December 2013. It was winter in Jordan, but the weather in the Dead Sea never goes below 25C, so we could go down to the beach in the middle winter and experienced floating on the water comfortably-ish. These photos were taken one afternoon at the Dead Sea after my daughter had enough of floating around.

So, in the Dead Sea, what you have to do after you have a ‘dip’ in the sea is to rinse yourself with fresh water right after you leave the overly salted water to get rid of the salt off your skin. The location of the nearest fresh water shower was two minutes and a steep staircase away from the beach. So, while Ms. 5 were waiting for the rest of the family to go up with her, she was playing with some mud or pebbles on the beach, and got totally air-dried right there. The white stuff you see on her was salt. All salt. Thick and crusty sea salt. It was like nothing I’ve ever seen before… 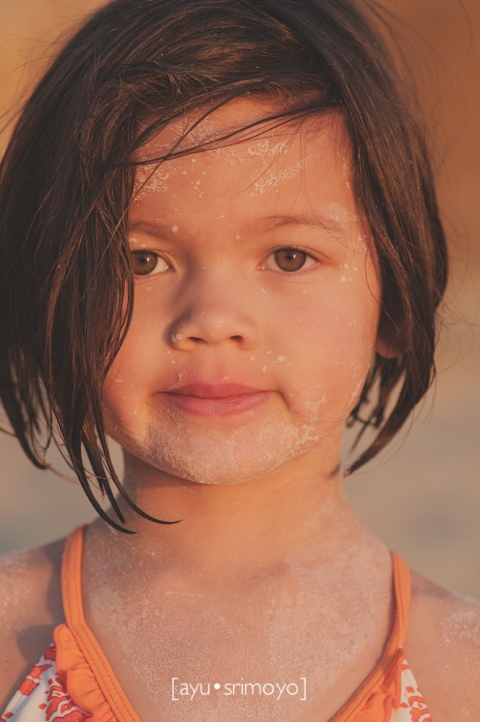 You have to try to keep the sea water off your face, as it can sting you so. Especially the sensitive areas like eyes and lips.

It was an indescribable experience to be able to do this in the Dead Sea. I felt really blessed. It certainly became one of the highlights of 2013, if not my life (!).

So there you go. Week 1 of the new project is DONE. I hope I will see you back next week, if not sooner, as I have been travelling to many interesting places this holiday and have tons of photos to share.

PS: Feel free to leave the link to your photography projects in the comment area, I’d love to make new connections and be inspired by all of you crazy kids.