Petra is amazing. No words, nor pictures can describe how amazing this place is. We went to visit Petra back in December. As one of the world’s 7 Wonders and UNESCO World Heritage Site, Petra surely didn’t disappoint.

You need more than just one day to visit Petra. To thoroughly see Petra. And preferably without kids with short legs 😉 . The area is massive. You will do a lot of walk, a lot of climbs mixed while standing with your mouth open looking up every two rocks or so. We were lucky to be there in winter, because the temperature was very nice. I heard it could be scorching hot in summer. I couldn’t imagine having to walk/climb/crawl in a 40 degrees heat weather.

Being there I had to juggle between taking pictures, exploring the place, while carefully walking the sandy paths that were  -in some part more than others- mined with animal droppings. We only had less than a day in Petra. We got there a little after midday and left just before it got dark. I think we only just ‘brushed’ the surface, though what a magnificent ‘surface’ it was.

Here are some images that were taken from the entrance to the Siq. It’s a sandy path about less than a kilometre long that divided in two; one for the animal (horses, carriages etc) and one path for visitors to walk. Even here we could already start to see some unusual rocks. 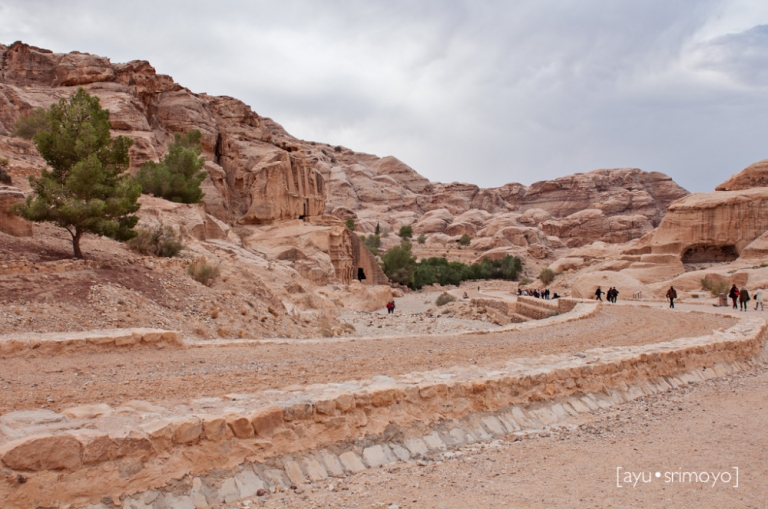 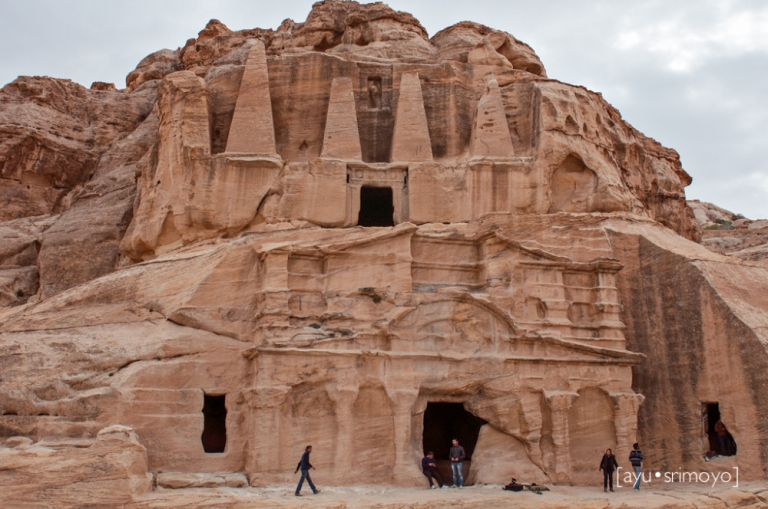 The Siq is the main road leading to the city of Petra. It’s a 3-12m wide narrow path with 80m rocky walls along side of it. It’s the most interesting walk I’ve ever had. The rock walls around us was truly magnificent; not only in size but also in colours. Many Nabatean carvings were made along the walls, which are interesting and apparently quite functional, back in the days. Animals, including horse carriage, and people walk through here to reach the Treasury. 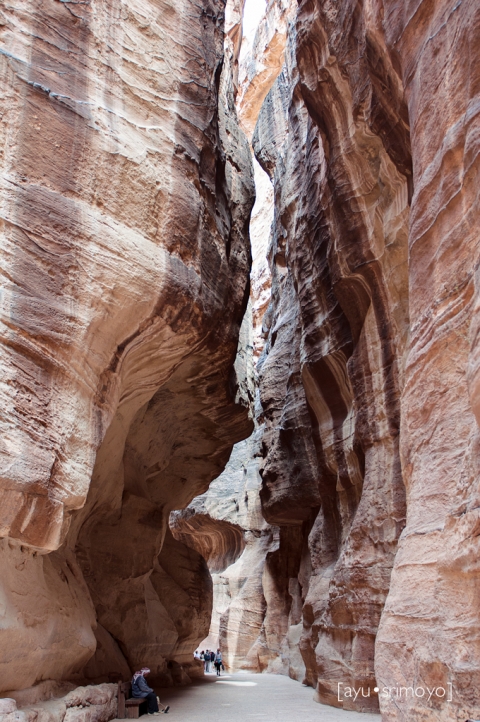 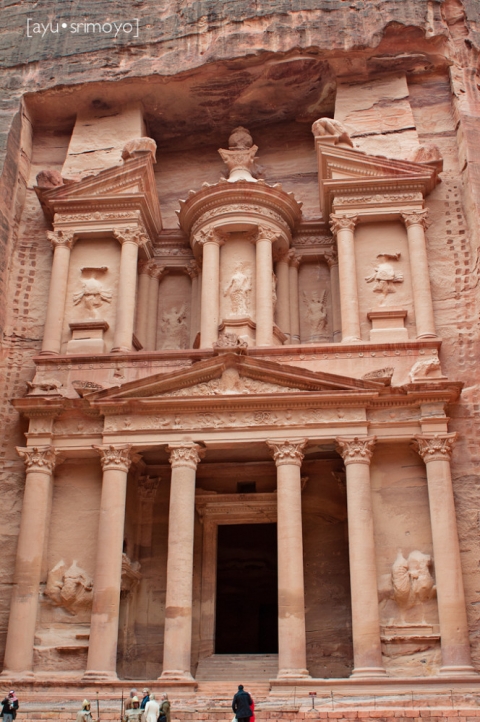 The urn you can see at the top was believed, long time ago, to contain great treasure, that’s why it is called the Treasury until now. 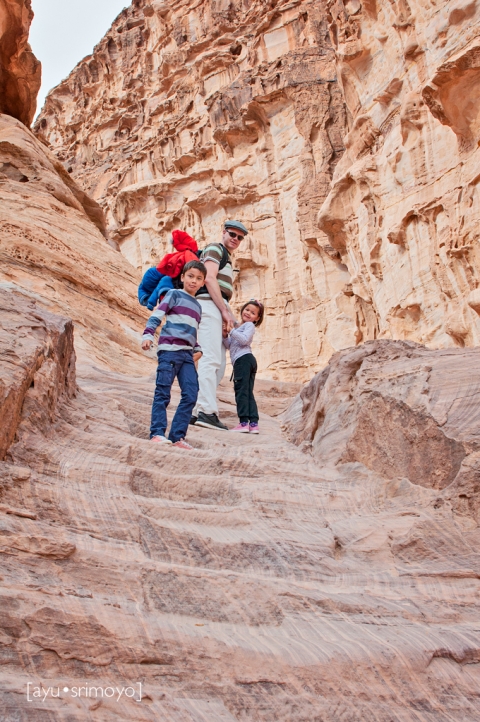 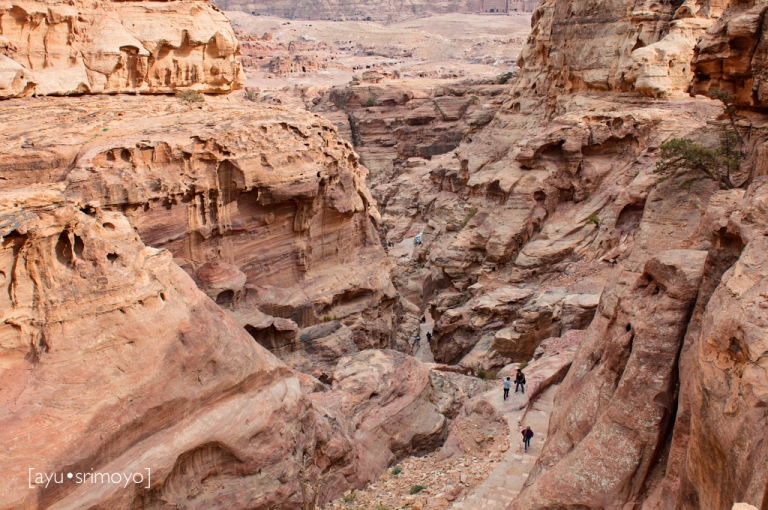 From here we continued towards the Monastery. The way there is long, and to reach it we had to go up 800 steps or so . With two kids and their sets of tiny legs we decided to hire a donkey and some mules. From here on, the photo taking became somewhat limited, because I was concentrating hard to not fall off my ride. We passed the wall of façades, many great tombs and temples along the way. We did not have time to get off our rides and see every one of them. Our destination was the Monastery, and the way was up up and up. At a certain point near the top we had to get off our animals because they were not allowed to pass anymore. We walked the remainder of the steps slowly but surely. Again, I was grateful for the cool weather we had that day. 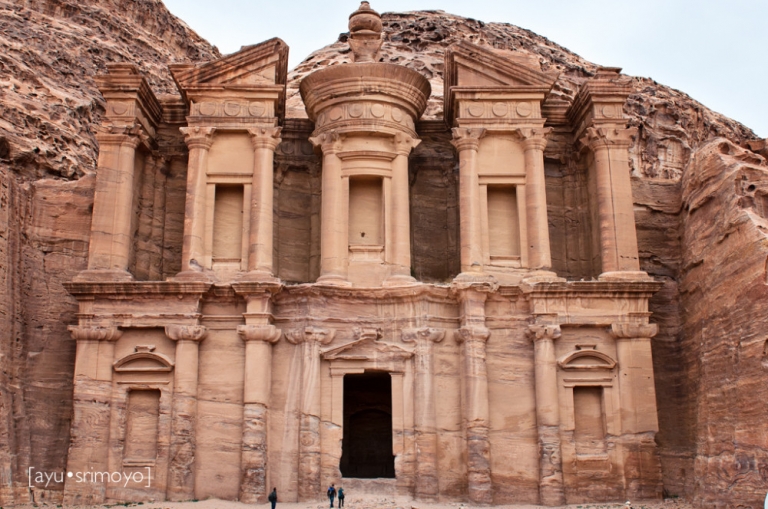 For more detailed information of Petra you can visit here. IMHO, Petra should be in everyone’s bucket list!

The sun was setting, so we had to start to head back. Going down the 800 steps and the long walk was still ahead of us. We got the kids back on their donkey until we reached the Siq, because otherwise I didn’t think they would survive the long way back.

It’s been a long and tiring day and our muscles were sore for days after. But it’s oh so worth the pain. 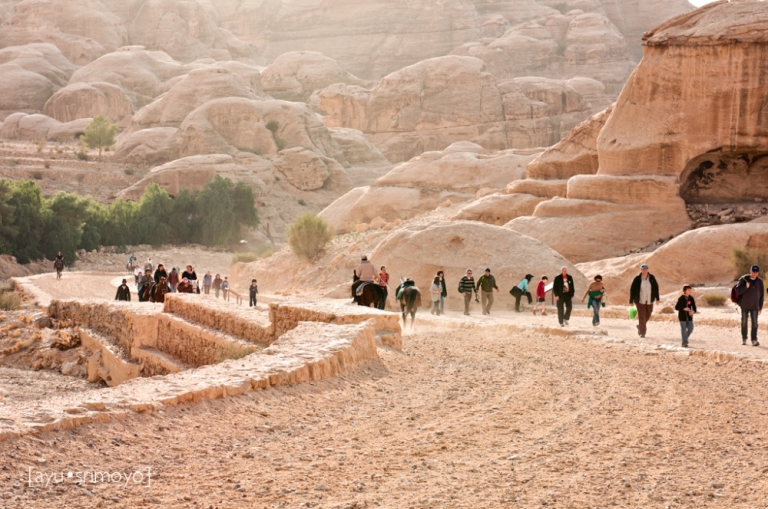