Walking amongst the ruins was scheduled (heavily) for the day. Ajlun (Ajloun) Castle was our first destination. Located 50 km from Amman, Ajloun was standing proudly up on the hill. Through an uphill winding road we passed villages, some olive orchards and other interesting landscapes. Going further up we could still see patches of snow that blanketed the ground.

We stopped half way there, to stretch our legs and to have some fresh pomegranate we bought from the side of the highway (it was a real thrill to buy fruit on the road side full of high speed vehicles). The air was crisp, the snack was refreshing and the view of tiny buildings and tiny roads spread out in front of us was just amazing.

Ajlun castle, locally known as Qalat er-Rabad, was a magnificent castle that was built to defend the land held by the Arabs from the Crusaders and other enemies. The castle was the best example of  Islamic military architecture from the era. 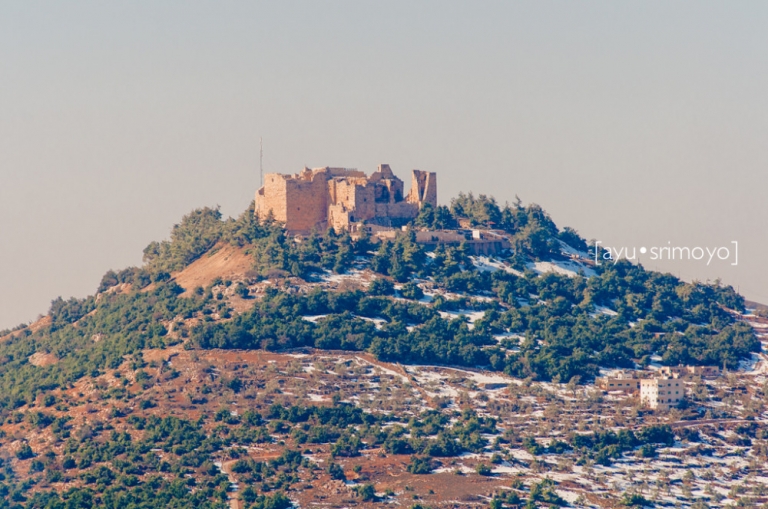 These two men were standing ready at their ‘welcome station’, in the cold (notice the pile of snow behind them), with steamy hot drinks, ready to serve visitors. They were stationed right outside the gate going up the hill towards the castle.

Once we reached the castle we could see that the moat was still there, though the drawbridge was not there anymore. A modern foot bridge was built there instead to go straight to the main entrance. The castle severely damaged by an earthquake back in 18th century and restoration only has started at the beginning of 20th century.

The interior of the castle was also fascinating. You couldn’t help but to imagine that people did live there, even when the place was more a military fort than a luxurious residence. There were corridors with stunning ceilings, stairways to various chambers, and more. Some of the chambers now were dedicated to display some artefacts, old tools and odd coins. One chamber was dedicated just for museum like display area.

As a military fort, the castle was built for defence and ready for battle. Constructions for defence purposes were embedded throughout the castle. There were things like murder hole, arrow slits, even moat that were built there to help make the castle impenetrable. I did not actually see the murder hole from the tower; it’s where they poured hot oil or hot water down to burn intruders. I did see some arrow slits, slits where archers sat to target and shoot their arrows at enemies, even though I found it hard to imagine someone actually sat on that spot. It was not a spacious area, or maybe it was just enough leg space for smaller people from back in the days.

Thanks to its high location, from atop Ajlun Castle’s towers we could see far and long over   the land around it. It must have given them a huge advantage back then, because they could notice earlier on when enemies were coming.

Now left with no enemies’ threats in the horizon, it was very nice to be standing up there and take a moment to really enjoy the view spread out beneath us.